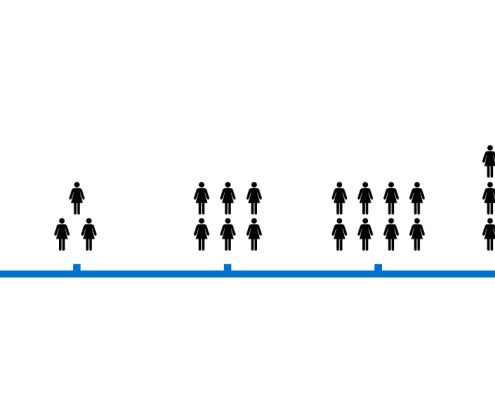 The history of women at Front Page

In the lead up to International Women’s Day, I started thinking about our agency’s history with women – where we started, where we are now, how we compare to our industry sector and the rest of the UK.

22% of agency owners are women

In 1990, Front Page was co-founded by Felicity Johnson. Back then, there weren’t many other female directors of creative agencies. 27 years later and we’re still in the minority – 22%, to be exact.

We’ve never not had a female managing director. I took over the role from Felicity in 2015, and I would love to keep up that tradition with Front Page’s next leader. It’s worth mentioning that I’m not the only senior member of our team either – over 70% of our senior team is female.

Only 16% of senior managers in the UK are women

While most of our senior managers are women, in other businesses across the UK that number is as low as 16%. And the stats in the digital sector are even worse with nearly twice as many men to women holding senior positions.

Those figures are slowly improving year on year, but it’s difficult to comprehend how the scales can still be so imbalanced in 2018.

Why are there less women?

Wondering why the stats are so skewed, I started to look further into women’s formative years, before they begin their careers.

Throughout primary, secondary and higher education, girls are doing better than boys. And compared to men, women are more than a third more likely to go to university. So, what happens when they graduate?

Although more women actually leave university with a degree, graduate programmes are dominated by men. Fewer women apply for these roles, despite having a higher success rate during the application process.

More women graduate than men. So where are they in business?

In recent years, Front Page has started mentoring at universities and running workshops for youngsters in schools. We’re hoping to target creative women to show there’s a career path waiting for them after they graduate. But it’s not enough to just hire women, we need to support them at work too and that means ensuring gender equality across every area of the business.

Although fewer women are having children, those who choose to have a family soon discover that the debate of whether working mothers ‘can have it all’ is still rife. And the focus is still very much on the woman as the primary carer, which absolutely adds to the pressure working women experience. I can’t help feeling that we need to look to countries like Denmark where there appears to be a much more progressive, and equal, approach to parents in the workplace. What’s more, our industry should be leading in this field. Just six weeks ago new research revealed that the advertising industry is failing working mothers – from false initiatives, to discrimination, so it looks like we still have a lot to do.

Having been a working parent myself for nearly 30 years, I know how important it is to support women while they are raising their families. Flexible working hours and open discussion is of course key, but I feel one of the best ways to really offer support is to lead by example – that means putting my own family first and working sensible hours.

I’m proud that we are, and have always been, ahead of the curve when it comes to employing and supporting women at work. But there’s always more we could be doing – both here at Front Page and in the industry in general. It’s something we’ll continue to work on until equality has been achieved, which I truly hope will happen before I hang up the gloves. We’d better get a move on.

Jackie Arnott-Raymond
Good at building client relationships, public speaking and dancing at any given opportunity.