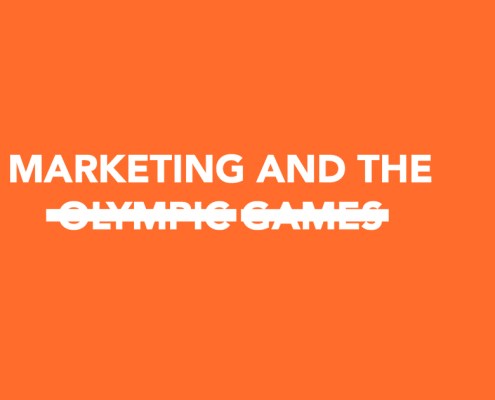 Unless you’ve been living under a rock, you’re probably aware that this summer, between 5-21 August, Rio will play host to the world’s biggest sporting event: The 2016 Summer Olympics. Since the first modern Olympics in 1894, the games have come a long way, and since they were first broadcast from Helsinki in 1952, the link between the Games and international mass media has grown exponentially.

The London Games in 2012 were broadcast on television in over 220 territories, with an audience of 4.8 billion viewers worldwide (10% more than the 2008 Beijing Olympics). London received over 60% more broadcast hours than Beijing and well over double that of Athens in 2004, with a total of 99,982 hours of television coverage— the equivalent of over 11 years of broadcast time. Looking at these figures, it’s clear to see how corporate sponsorship has become such a key aspect of the Games, with marketers across the globe clamouring to be involved.

In the run up to this years’ Games there has been a certain amount of controversy surrounding the International Olympic Committee’s (IOC) ‘Rule 40’. If you haven’t heard of this Olympic Charter bylaw, it prevents athletes from using their image, likeness or performances in advertising unless it involves an official sponsor. Rule 40 also creates a blackout period where (non-official) marketers cannot mention Olympic athletes or the Games themselves in the run up to, and during, the Games.

The IOC states that rule 40 preserves ‘the unique nature of the Olympic Games by preventing over-commercialisation’. While the rule is there to protect the interests of paying sponsors, it has been widely criticised, mainly by the athletes themselves and their sponsors. Earlier in the year, the IOC announced changes to the rule, allowing athletes to appear in generic advertising that does not specifically mention the Games or use its intellectual property. Athletes can now also tweet about non-official sponsors provided they don’t use Olympic IP (such as “Olympics” “2016” “Rio” “Games” and “Gold”). However, in order to take advantage of these changes, non-sponsor brands had to submit plans for advertising and social media campaigns by January this year, and ads had to be in the market by March 27.

One notable company to benefit from the relaxed rule has been Under Armour. While not an official sponsor of the games, the company sponsors 250 Olympic athletes, including Michael Phelps, Natasha Hastings and Andy Murray to name but a few. Their latest campaign launched before the March deadline and focuses on Michael Phelps, the most decorated athlete in Olympic history, preparing for his final Olympic games, and follows the requirements of rule 40.

And it’s not just Under Armour who has taken advantage of the more relaxed rules. Go Pro have created a nine-part series featuring athletes and their journeys to the top of their sport, and Gatorade have created a series of ads starring Serena Williams, Usain Bolt, Paul George and April Ross.

It seems though that the main beneficiaries of these relaxed rules are still large, multi-national companies. Where does this leave the little guys? Only this month, Oiselle (a relatively small women’s running apparel brand) fell foul of rule 40 and were instructed to remove social media content congratulating their athlete, Kate Grace, after she finished first over 800m in the US Olympic trials and qualified for Rio 2016. Grace herself and Sally Bergesen, founder and CEO of Oiselle, have both criticized rule 40, as summarized in this blog post by Bergesen. Oiselle have pointed out that fans are not restricted in any way, and are encouraging members of the public to use the hashtag #freebrid16 to support their athletes, and to do the same for other brands and athletes.

Some commentators have suggested that the relaxed rules will diminish the value of Olympic sponsorship due to reduced exclusivity. While this may be the case, it is difficult for smaller companies to plan for marketing campaigns months in advance. Besides the cost of running a campaign from March through to August, many sponsors may not be certain if their athletes will even qualify for the Games so far in advance.

The majority of professional athletes rely heavily on sponsorship from companies such as Nike, Adidas and Under Armour as well as smaller companies such as Oiselle, and without this sponsorship, they wouldn’t be able to train full-time. Oiselle have reportedly committed around $300,000 toward Kate Grace’s training and development over the last four years, and while they claim to run their business like a family, they must expect to see a return on such a significant investment. Being unable to capitalise on their athlete’s Olympic qualification has been a big blow to the company. With such strict rules being imposed (and enforced) it begs the question, where’s the incentive for non-official Olympic sponsors to fund athletes at all?

While sponsors and the IOC continue to fight it out over who can share what throughout the Olympic year, the people who have the biggest stake in the outcome are the very ones being left out of the discussion. Athletes should be at the very core of decisions made around the Games; without them, there would be no Olympics.

Following the controversy surrounding rule 40, it would be nice to see these bylaws reviewed before the Tokyo Games in 2020 and an outcome reached which wouldn’t punish those athletes whose sponsors are not official Olympic partners. The interests of official Olympic sponsors should rightly be protected, as they undoubtedly ensure the continued success of the games, but this should not be at the expense of the participants themselves.

I wish I were a designer
Scroll to top