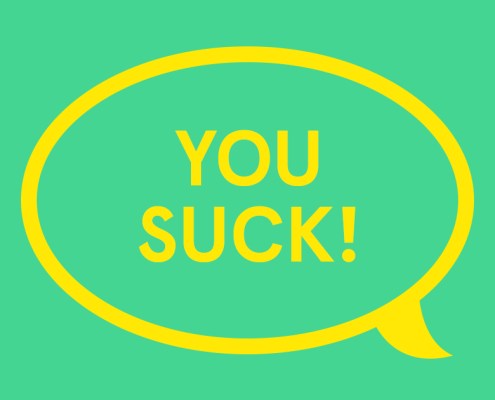 Logos, The Brand™ & The Art of Taking Criticism

There’s a footballer you may have heard of called Efe Ambrose. A Celtic player, he’s been at the club since 2012, appearing 112 times, earning thousands of pounds a week, living the dream. Thing is though: he’s rubbish.

Of course, you don’t need to be a terrible footballer to get barracked by football fans. Even the very best in the world, if they show the slightest waver in form, will draw derision from disgruntled fans, who are the most vocal in airing their views. For them, it’s all or nothing, black or white. Criticism and praise come freely, and easily – and the criticism can be brutal.

Journalists aren’t slow either. The informed ones, at least, have a better understanding of what being a footballer involves – often having access to the workings of the inner sanctum – and as a result, their criticism tends to be less brutal and more insightful. That said, they also know which buttons to press to get a reaction.

There is one group, however, that rarely criticises, and that is footballers themselves. They almost always back one another, preferring to say nothing or resorting to bland clichés rather than say anything controversial. I guess because they know what being a footballer involves, right? They know what it takes to get to the top.

But while thousands – myself included – will groan or shout abuse at players like Efe, we do so in the knowledge that no matter how bad he plays, he’s still better than us. Stick ten years and 50lbs on him and I’m certain he could still – to use a well-worn footballing phrase – keep a beach ball off me in a phone booth.

That said, does the fact that I’ll never be at the top level of football stop me criticising? No. Does it make my criticism less valid? Absolutely not. And where, exactly, is this going?

Here’s a bit of context: this blog has been a long time in the writing. I started it in January this year, as a reaction to a ‘Best of…’ list I saw on logo design from last year. And to be frank, I wasn’t all that impressed with what 2015 had to offer.

But before I could get started came a spate of high profile rebrands – Gumtree, Uber, The Premier League, The Met, Instagram – that also brought with it the customary sport of logo bashing. As the figurehead of a brand, the pin badge, the avatar, the logo is the first thing people see and the first thing people form an opinion on. It’s accessible, relatable. People – rightly or wrongly – feel it belongs to them so feel they can pass comment.

So with one logo shitstorm brewing after another, I decided it best not to wade in with another opinion piece. Not at that point anyway.

But as is always the case, just as I’m finally finishing off my blog, someone else – Studio Output’s Rob Coke – writes on a similar topic, but in a much better way than I can. In reaction to the launch of the new/old Co-op rebrand, he even touches on some of the exact points I make here too. Still, I’ve written this much now…

In 2010, Simon Manchipp declared, with not a hint of hyperbole…, that the logo was already dead. Nonsense, obviously, but perhaps he could see what was coming: the logo’s slow and steady demise at the hands of The Brand™.

The Brand™, of course, is the be-all and end-all of the world as you and I encounter it. Everything is about The Brand™; how you taste, feel, experience, and – crucially – remember, The Brand™. So it follows that from a design point of view companies, brands, are more than just a logo. And no sane person really can disagree with, right?

You might ask then, why are we all so concerned about the logo? The logo is just the signature. The Brand™ on the other hand, is the personality, the character, the essence.

But there is an art, a craft, to good logo design. You don’t need me to list off the all-time greats; no need for links to the Top 50 Logos of All Time, because you probably know them all. They’re iconic, many of them works of genius for a whole number of reasons. Do we still get that these days?

The Brand™ is King, yes, but is the logo suffering at its expense?

The, arguably, dying art of creating something clever, beautiful, informative, memorable and iconic, that can be recreated in single colour at the tiniest of sizes, or stand 6ft high carved out of granite, is something I feel should never be underestimated. Instead it should be revered and celebrated and most importantly, expected of the design world.

You need only look at the likes of Unit Editions and others, who are painstakingly resurrecting branding manuals from the 1960s and 70s (through Kickstarter) to see that there is still a huge appetite for logos – brilliant logos – from generations ago. These branding manuals, however, are more concerned with the application of the logo, ensuring consistency across the board, and less about your chummy, “alright mate?” Brand Tone Of Voice™ application.

So why not take more care over and pay more attention to logo design? Maybe if we did, the knee-jerk critical reactions they receive wouldn’t be as prevalent? Or maybe we’d have more confidence in our work? We know it’s all about The Brand™. But does that mean a logo can’t, or shouldn’t, be judged on its own? By all means, don’t judge a logo as a brand; but surely you can judge a logo as a logo?

This, then, brings me back to criticism. The logo tends to receive the most criticism but with the focus of design agencies being on the brand nowadays, perhaps that’s not surprising? Are logos really not as good as they used to be?

There’s an interesting line that comes from design agencies in the face of criticism: effectively ‘give it time’. The logo for London 2012 famously got that a lot. ‘Give it time to bed in’; ‘you’ll grow to love it’. Released in 2007, it had five years to sit in the public’s consciousness, so the adverse reaction to how it looked lessened over time. There’s no doubt the visual success of those Olympic Games came from the graphic identity. The ‘give it time’ line is perfectly suited to something as wide-ranging and evolving as a brand identity. But a logo? I’m not convinced. Even after nine years, is there anyone willing to say it’s a great logo? Anyone who will, hand-on-heart, say they grew to love it?

But that’s the point, isn’t it? What actually makes a logo good? How it looks to me will be different to say, my dad (who still doesn’t really know what I do for a living). And is it how it looks that makes it good anyway? Isn’t that its success? Or is the success of a logo solely down to the branding and marketing surrounding it?

It’s easy to go round in circles.

But looking at this selection of logos, I reckon of 124 there’s an unhealthy percentage of less-than-stellar work there. In fact, one of these logos has since been shelved amid plagiarism claims and replaced with something arguably worse.

No question, there are many logos here attached to successful brands with equally successful branding. And this is by no means a list of poor or even underwhelming work. However, I just wonder if this is what we should expect of the highest profile logo (re)designs of last year?

In my opinion, criticism of many of these logos, and graphic design in general, is valid (except the never-ever-helpful “my seven-year-old could have done that”) but there’s another line that comes from designers: that criticism is unwelcome and uninformed. As with footballers, if you’ve never played the game, you can’t comment.

Surely in the end, everything in the public domain is fair game? Even more so when it’s high profile? Graphic designers the world over will tear apart movies, tv, books, architecture – often in the uninformed, off-hand way we hate our own work being criticised. It seems at times we can dish it out but we can’t take it back.

In that regard then, who is allowed to criticise? Not Joe Public, because they have no experience in design, right? But also, not the vast majority of designers either, because they haven’t dealt with budgets so vast, with reputations so huge. Do we whittle it down more and more until we end up with the absolute ‘elite’? Where would that leave us? Like our non-critical, non-offensive footballers? For me, criticism is the price we designers have to pay for doing the job we love. We can’t expect to be taken seriously as an industry, and receive the respect we want – and deserve – if we can’t take criticism. Surely none of us wants an industry that is criticism-free?

In the end, if you’re happy, and your client is happy then it’s job done, surely? Who really cares what Angry of Tunbridge Wells thinks? Or is that too simplistic? Granted, sometimes the criticism can come from a fairly well-regarded designer, and that criticism can be savage. (For me, in this instance, unnecessarily savage.) But in any case, the world moves on, logos and branding have time to ‘bed in’, and soon it’s usually someone else’s turn to get it in the neck. Sadly not for Efe however, who no doubt wishes this was the case.

This has been a hard piece to write. Logos are the one thing that led me to graphic design; as a youngster I sketched out football kits in order to replicate sponsors’ logos, either logos I loved that I wished were on football kits, or creating my own. To watch this art slipping in importance and not have the time spent on it that I feel it deserves, concerns me. After saying all of this, maybe in the end I’m nothing more than a romantic, pining for a time that no longer exists. But my hope is that 2016 sees the renaissance of logo design, where we see work created that will sit alongside the greats. Even if it takes resurrecting a classic and building upon it to act as a catalyst, the talent is undoubtedly out there to make it happen – we just need to invest a little more time and a little more love.

And perhaps not get so wound up about criticism in the process? If it’s well-meaning and constructive, then in accepting it we won’t be seen as aloof or untouchable as we often are by the general public. Whether we agree with it or not is another matter altogether…

No critique can be critical