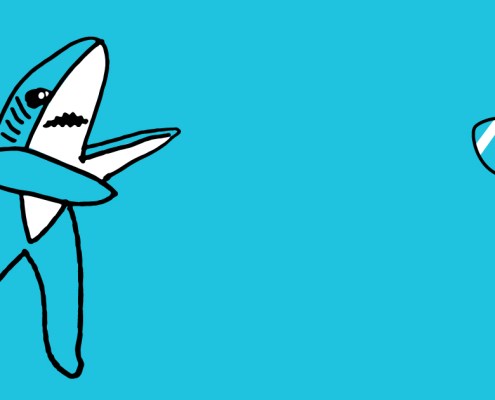 Every year, millions of people all over the world, tune in to watch the biggest game in the NFL calendar – the Super Bowl. Last year 113.4 million viewers watched Super Bowl XLIX on NBC, making it the most watched broadcast in American TV history.

But it’s not just the game itself that pulls in the viewers. Over the years, the halftime show has seen performers such as Madonna, Beyoncé and The Black Eyed Peas entertain the crowds. In recent years, the halftime show has been viewed as much the game itself, with 118.5 million tuning in to watch last year’s performance from Katy Perry, who strutted her stuff on stage alongside Lenny Kravitz and Missy Elliott. Arguably though, it wasn’t Perry herself who stole the show, but the now infamous ‘Left Shark’. Within minutes of appearing on stage, the dancing shark had become an internet sensation. A Google search for ‘Left Shark’ yields over 64,000 results, including hundreds of news articles and memes. On twitter, Left Shark has several accounts, the most popular of which has over 20,000 followers. One thing that the rise of Left Shark has shown is that the Super Bowl—and its star-studded halftime spectacle—cannot be ignored.

Figures published by Billboard show that viewing figures for the halftime half-hour outperformed every other half-hour block of the show with the exception of the final 40 minutes of the game, proving that the Super Bowl appeals not only to sports fans, but also to those whose only interest is the extravagant performances of the half time show.

No wonder then, with such enormous viewership, that a mere 30 second advert during the Super Bowl will set you back a cool $5 million. With big brands such as Pepsi, Budweiser and Doritos stumping up the cash year-on-year, advertisers must feel like they’re getting bang for their buck.

But who is doing it best? Every year, the USA Today Super Bowl Ad Meter takes a live poll during the broadcast of the game and ranks adverts from best to worst. Since the Ad meter started in 1989, Budweiser, Bud Light, Doritos and Pepsi have dominated the rankings, with one of the four being in the top spot almost every year.

Here’s some of the best ads from over the years:

This Orwellian ad for the first Macintosh computer, directed by Ridley Scott was aired only once – during the third quarter of the 1984 Super Bowl.

The Budweiser Frogs were featured in a series of ads from 1995 until 1998 when they were replaced by lizards. It all began with this simple but memorable ad from the 1995 Super Bowl.

Doritos runs an annual contest asking customers to create their own ad, with the winner being shown during the Super Bowl. This was the winner in 2014.

There are also brands that prefer not to pay the big bucks for ‘official’ Super Bowl ads— the ones shown between kickoff and the end of the game—but would prefer to stick to social media campaigns or ‘ambush marketing’.

In 2013, a power cut at the stadium caused some of the lights to go out for over half an hour. Oreo’s social media team jumped into action and tweeted the message “Power Out? No Problem” next to a picture of an Oreo cookie lit up like a delicious, biscuity beacon. The tweet has over 6,000 likes and 15,000 retweets and the same image on Facebook has over 20,000 likes. That’s petty good going for an ad that cost them a fraction of what the big boys were paying.

Power out? No problem. pic.twitter.com/dnQ7pOgC

In 2014, Newcastle Brown Ale’s Super Bowl ad didn’t technically exist. Instead, they released a series of videos, which imagined what their ad would look like if they did make it. The videos make fun of the ‘standard’ Super Bowl ads and created enough buzz that Newcastle Brown Ale stole the limelight from some of the ‘official’ ads and won Ad Week’s ad campaign of the year.

No matter if you’re watching for the game itself, the half time show, or even the ads, one thing is for certain—this Sunday’s Super Bowl is bound to be bigger and better than its predecessors. I’m looking forward to seeing all the ads and will definitely be keeping an eye on twitter for 2016’s equivalent to ‘Left Shark’.

Creative lessons from a toddler
Scroll to top